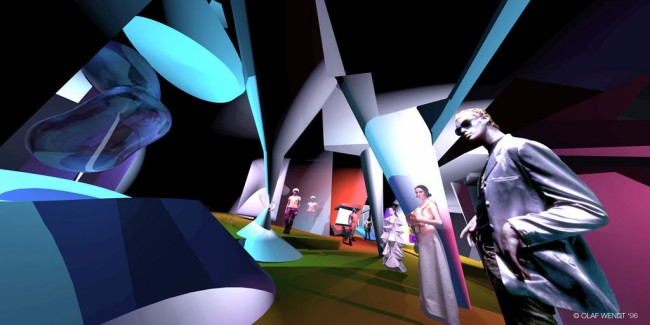 This exhibition showcases images from a number of his projects executed in the 1990’s including record covers, a tech-noir action adventure game called Burn: Cycle and Virtual Nightclub, an interactive music experience. 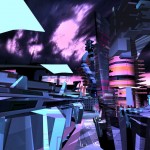 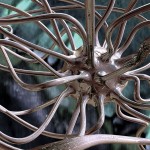 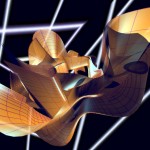 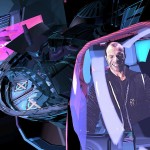 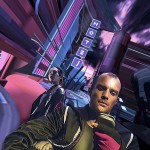 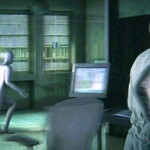 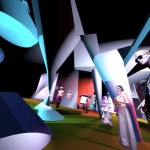 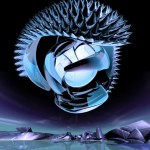 
“I started creating â€œworldsâ€ when I was sixteen years old back in the 80’s. I was using a mainframe computer at the local university in Germany to draw cubist arrangements of solid volumes on a Teletype. At the time I was gaining inspiration in equal measure from abstract expressionists and Tron.
Olaf then moved to England to attend University at Oxford. His work continued as he started designing visuals and images.

â€œThis was the first time that artists could finally lay hands on tools that let you rip. The digital wave was crashing through music and the visual arts, making it possible to create windows into this world that I had only ever glimpsed between the curtains of a silver screen“ a world that seemed inaccessible and remote before.

The frame of reference for Olaf was always film. â€œNow you could let your audience loose within a world, a world with its own visual language.
The new forms of games at that time were called interactive movies, which included storylines and characters.

And looking back this work presents a stylistic and thematic unity not found in much of the present noise. It is very much of its time, retro if you will, its roots and influences clearly visible; but also pointing forward to a new understanding and use. â€œFor me it became a fusion of constructivism, expressionism with a dose of the surrealists of course, drawing also on the new emerging visual forms in architecture and design” Wendt explained.

Olaf Wendt currently lives and works in Los Angeles as a visual effects designer and supervisor. He’s worked on films include Real Steel, Gulliver’s Travels, Act of Valor, Dylan Dog, Harry Potter and the Order of the Phoenix, Paul Verhoeven’s Black Book amongst others.