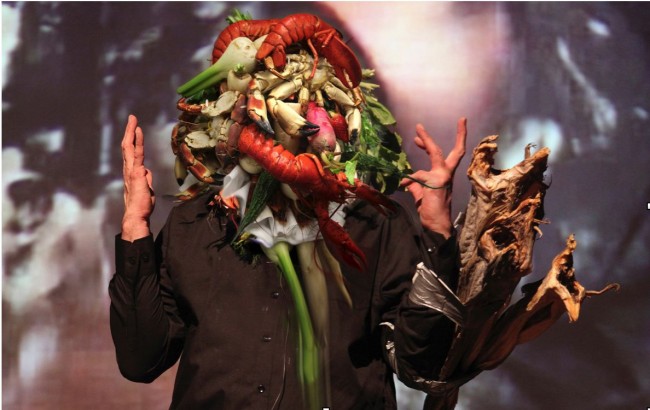 Rehearsal for Life and Death

What would have happened if theatre could be used in our life to replace reality? What if our everyday life was transformed to tragedy?

The Rehearsal of a human drama, wearing  a costume, ‘Nature as Spectator’, is a unique element in this live performance, presented for one night only at Unit24 Gallery. Here the rehearsal is an art form in itself. It includes the doubt and “the mistake” whilst Filippos Tsitsopoulos will embody the character. A mirror is replaced by the public and it will react with the parade of contrary feelings opposite to a coherent self presented by the performer.  Using self constructed masks made with materials as diverse as organic substances, animals and plants, he creates parallel equivalents that contain and juxtapose elements that are temporarily out of proportion. Juggling between personal facts in this absurd play, Tsitsopoulos make us feel as if we could dramatize moments, a rehearsal of supposing life and death, human reactions and grief over animals and plants .

Using cruelty, sarcasm, tenderness, joy, grief, Tsitsopoulos is holding rhetorical absurd speeches mixed with theatrical texts and songs.  Placing the audience in strange positions, some of them against the wall with a mirror, others with a lantern focusing at their eyes, to view a part of the overall work,  which creates a unique sabotage of feelings generated. Using mini speakers placed inside the dead fish and talking vegetables, we hear the supposing reaction of the creatures to their grief.Performative rehearsal is nor defined with a finished artwork behavior. Tsitsopoulos will present an open artwork where he tests various theatrical idioms in front of the audience as the major expression of freedom by questioning a ‘complete’ live art play. He stages human feelings and desires and performs them in front of a mirror / audience.  All future behaviors will be positioned and questioned on stage.

Filippos Tsitsopoulos is a Greek born artist who works with interactive theatre , video art, installation and painiting to explore  the limits of performance since 1990. His diverse practice engages the audience/participant to a system that includes theatre as a catalyst in our daily life. Since 2005 Tsitsopoulos has been an external collaborator at the Education Department of the Prado Museum, where he teaches Drawing and Art Aesthetics, focussing on the subject of irony, which he researched extensively in his doctoral studies in Madrid.