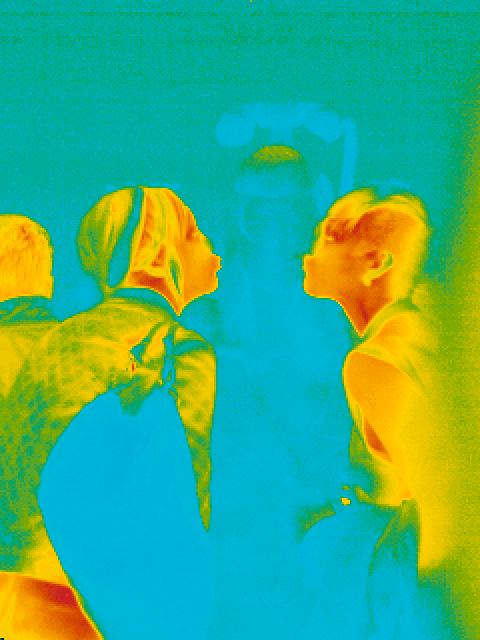 Focal point is widely associated with cameras as a term describing the point at which initially collimated rays of light meet after passing through a convex lens. At the same time, it is also a term used in the game theory. Focal point (also called Schelling point) is a solution that people tend to use in the absence of communication. Nobel Prize winner scientist Thomas Schelling introduced the term and described it as follows: ‘focal point for each person’s expectation of what the other expects him to expect to be expected to do’. The concept applies to a wide range of situations, for example when there are two people isolated in two separate rooms and they have to make identical decisions. They face the question of expectations not only about their own decision but also of expectations about each other’s expectations. Under those circumstances, people tend to think and make decision upon knowing or imaging what may seem natural, special, or relevant to themselves and to others.

The exhibition applies the concept of Schelling point to an art situation. Through works by participating artists, the show explores complex relations between artworks as objects which may represent certain phenomena from the world around, and artists’ performative acts of representing: choosing, creating, portraying, (de)forming, etc. The selection of works reveals interdependence of artists’ decisions and viewers’ anticipations. It also touches on the issue of how people and objects are expected to be portrayed or presented through artistic means of expression as well as the way an exhibition allows audience to experience art.

Focal Point investigates how communication may look like when it goes beyond rigid and limiting rules of linguistics. The show also explores the gap between – and improbable proximity of – the world of images that is subjective to each and every viewer and the expectations from some members of the audience to see particular objects in the light of objectivity. Situating artists and viewers on the creative side of meaning production, the works on display oscillate between the issues of political history, distribution of power, social dependency and hierarchy, mysticism, and individual experience of destruction.

Although the medium plays mostly secondary role in the works on display, Focal Point presents a wide range of techniques and materials used by the artists: from the intricate collages of Christopher Oliver, through the documentary photographs taken with a thermographic camera by Kenji Hirasawa, to the large-scale meditative photographs of Darek Fortas, to Joanna Sperryn-Jones’ interactive, ephemeral, and materially surprising installation.

Both Joanna Sperryn-Jones and Christopher Oliver used the concept of Schelling point as inspiration and created works specifically for the occasion of the exhibition. Sperryn-Jones’ multi-piece installation is designed to interact with the audience and even be totally destroyed by the viewers. Huge glass wax sculptures are extremely fragile and need to be treated with the utmost caution in order to stay unbroken. Yet her installations are frequently smashed to pieces by the end of the show. While playing with the way viewers’ are accustomed to behave in a gallery, the installation challenges audience’s perception and reveals subordination to preconceived strategies of art communication as well as adherence to a strict code of viewing and experiencing art in a gallery situation. 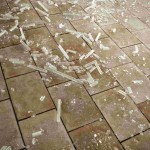 Joanna Sperryn-Jones, Risk, final day of an exhibition in 2011 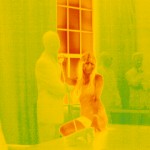 Christopher Oliver resists confinement to a single medium, roaming freely and fluently among drawing, sculpture, installation, and painting. His latest body of collages builds a bridge between abstract and figurative experiments. A strong interest in religion, mysticism, and identity formed the basis of selection criteria for loosely connected fragments of landscape photographs. Executed with precision, the collages on display incorporate gold leaf, various found materials, and cast acrylic sheets. Although demonstrating the presence of spiritual as well as popular culture references, Oliver’s work eludes straightforward reading.

In Celebrity (2011), Kenji Hirasawa portrayed waxworks of historical and contemporary figures at Madame Tussauds in London along with vast crowds of visitors gathering around, posing, smiling, making faces, taking selfies, etc. An interest in the phenomenon of common admiration of celebrities, their dependence on the audience as well as determinants of social stratification constituted a point of departure for artist’s investigations. The images themselves are taken with a thermographic camera, therefore each pixel represents specific temperature information. On the occasion of Focal Point, Hirasawa decided to exhibit selected photographs in a form of a triptych. Dialogic correspondence between particular segments emphasises unusual combinations of colours and stark contrast in the images of recorded heat emitted from visitors’ bodies, whereas the lifeless waxwork models remain barely seen. On display, there are also two works from Celebirties series (2009-2011), in which Hirasawa made portraits of the figures alone.

Darek Fortas’ At Source series (2013) forms part of artist’s ongoing investigation into the political history of Poland. Fortas visited his homeland and searched for signs of communist resistance that led up to large-scale demonstrations in the second half of the 20th century. The photographs of isolated objects simultaneously portray and transform familiarity. At Source performs what photographer Richard Avedon once referred to as ‘silent theatre’ — an attempt to achieve illusion: that everything embodied in the photography simply happened, that the presence of the image-maker did not influence the image, that the objects in the photographs were always there. The imagery of a pile of frozen sand, a fresh cut wood, and a piece of soil constitute the portrayal of struggle and convey both historical and contemporary references. 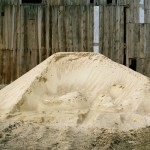 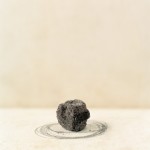 Darek Fortas is a lens based artist. His research interests include politics, aesthetics, distribution of power in the state and role of the photographic image allied to Jacques Rancière’s notion of dissensus. His practice can be characterised as consisting of a combination of documentary-style fieldwork and constructed studio practice and both of a very formal aesthetic rigour.

In 2014, Darek was announced the recipient of the Camera Clara Prize initiated by The Grésigny Foundation in Paris. He was also shortlisted for MAC International 2014 Art Prize as a part of MAC International 2014 Biennial. His project ‘Coal Story’ was nominated for the Alliance Française 2nd Photography Award and shortlisted by Chris Hammond for Claremorris Open Exhibition 2011. Darek is also the recipient of the Arts Council’s Visual Art Project Award 2013, and the winner of the Propeller Fine Art Award 2011. He was also nominated for The Foam Paul Huf Award 2012.

Kenji Hirasawa uses the medium of photography to scrutinise and explore phenomena of human life. ‘A study of what it means to be human’ constitutes the theme which pervades his body of work. Using different type of tools and subjects, Kenji also investigates how politics, faith, hierarchy, media, and economy are formed and intertwined nowadays.

Kenji completed his BA in Environmental Information at Keio University, majoring in media design. He has exhibited widely throughout Japan including Aoyama Spiral in 2005 and Roppongi Hills observatory in 2006. He held his first solo exhibition at KK Outlet, London and at the same time published his first book, Celebrity from Bemojake in 2011, which was awarded International Book Award 2012 and shortlisted for Aperture Foundation PhotoBook Awards at Paris Photo 2012. He was also a contributor to SHOWstudio. Currently Kenji is enrolled in the postgraduate Fine Art Programme at the Royal College of Art.

Christopher Oliver is a multidisciplinary artist, writer and professional music producer. His research interests include exploration of mysticism and power in nature, science and religion. Christopher’s recent individual visual art shows include: The Mysterious Function of Belief presented at Lewisham Art House (2014), and Ionian Blues featured at Pelican, London (2014). His music body of work includes a feature on London independent cult label No Pain In Pop; with press including a feature in the NME and an exclusive mix for Dazed & Confused, amongst many other favourable reviews. He has produced music for fashion labels Kenzo, Hunter Original and Parisian department store Printemps as well as Radio play on XFM and BBC Radio 6. He also co-directs the creative collective BLBX and collaborates with his twin brother Daniel Oliver, in their creative endeavour Temple Laboratories.

Joanna Sperryn-Jones explores experiences and perceptions of breaking through processes of making and breaking in sculpture. Her doctoral thesis simultaneously explored and drew parallels between personal experiences in life, such as breaking bones, with those of making/breaking sculpture, philosophical concepts of the break and breaking as a methodology. She is Program Leader for BA (Hons) Fine Art (Integrated Media) at University Centre Blackburn College.

Joanna has exhibited in the UK and internationally in Germany, Denmark, Greece, Norway, Finland, USA and Canada. She is a member of the London Art Xchange, who recently created an artwork for Richard Wentworth’s ‘Black Maria’ at King’s Cross. Joanna was shortlisted for the RBS Sculpture Shock prize in 2012. She has presented numerous conference papers over the last few years including as an invited speaker at the Medical Museion in Copenhagen. She has contributed chapters to two books, one on artistic research and the other on destruction art, and has a third being published next year on knowledge generation.