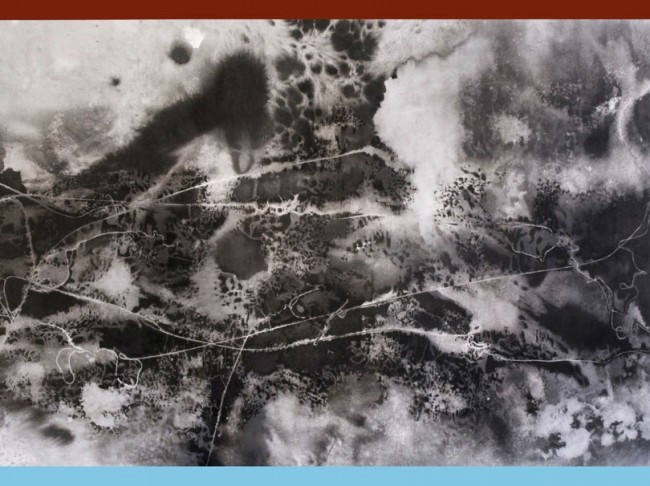 Unit24 Gallery is delighted to announce Joseph Kucinski’s first solo exhibition in London. The show comprises a selection of paintings dating from 2011 to 2014. The work on display is inspired by the  aerial views seen by the artist on frequent flights from the East to the West Coast of the States as well as reflection on personal experience. The title of the show, a line from a novel by Gabriel Garcia Marquez, touches on the idea of a distant perspective on biographical, psychological landscapes rather than topographical maps.

Kucinski employs abstract expressionist free-form and experimental technique as well as non-objective style that clearly draws inspiration from conceptual, materialist, and gestural approaches to art-making. Adopting black ink as main medium, Kucinski uses such unconventional tools as thick threads and mops to spread it over horizontal canvases and create gigantic and energetic abstract works. Exploring possibilities of drip painting, artist’s creations demonstrate the presence of broad brush movements, inflected hues, undulating lines and floating forms. Gestural lines he employs conceive a spectacle of intermingling patterns and biomorphic imaginary that encourages viewers’ eyes to travel from one corner of a canvas to another and back again. While painting, Kucinski uses not only the force of his hand or arm but takes advantage of his whole body. By putting expression and action in the spotlight, viewers’ attention is directed not only to the artefact itself but also to the process of making a painting as artist’s movements become reflected in an image and constitute its final effect. To finish a painting Kucinski applies iron impregnated oil as well as gold, silver, or copper leaf.

In contrast to monumental canvases, the show also features a selection of monochromatic ink on paper works dating from the last three years. The works on display are in fact complex material experiments and convey a dynamic interplay between molten surfaces and inner tensions. Horizontal strips, omnipresent in Kucinski’s paintings, resemble lines separating individual film frames and derive from artist’s fascination with the fourth dimension — time. „Without time we would wash adrift in a chaotic sea. It swaddles us with memories. It gives order to a flood of images and sensations. The process of using ink washes is a meditative act meant to embody our instinctual unconscious and conjure past events,” claims Kucinski.

Joseph Kucinski (born in 1980, Amherst, Massachusetts) studied at The University of Massachusetts, Massachusetts College of Art in Boston, and the S.U.N.Y. Purchase Visual Arts Conservatory in New York, then moving to the West coast, founded the JKS Gallery. He currently lives in Portland Oregon, and has been involved in many private commissions and public collections. Joseph has shown internationally for over ten years including New York, Massachusetts, Oregon, California and Washington. He has exhibited recently at The Herrett Museum in Idaho (visiting Artist Series), Mark Woolley Gallery in Portland, and The Sixth St. Gallery and Solo Gallery in Washington. Joseph participated in Irelands’ inaugural Dublin Biennial in June 2012 and is featured in Volume 17 of Studio Visit Magazine and Creative Quarterly Vol. 17. He has been featured in the VUE National Contemporary Art Fair in Dublin with Eight Gallery and had a solo show in Hong Kong in 2013 with Above Second Gallery. Joseph was shortlisted for the 2013 Emerging International Artist award in Dubai, March 2013. In 2014 he traveled to Warsaw, Poland to participate in Forbes Great Ball with Unit24 Gallery and The Maestro Foundation. He will present two solo shows in 2014 with Unit24 Gallery, London followed by Seoul, Korea. He is also currently showing and represented by Gallery 903 in Portland, Oregon. 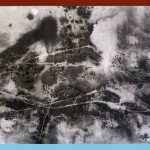 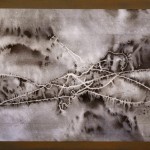 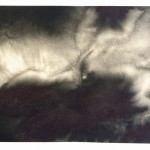