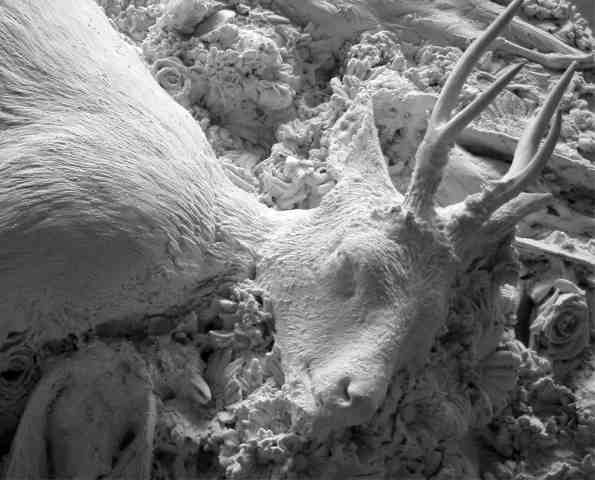 Peggy Atherton is a graduate from the RCA and has been curating and exhibiting since 1996. Recent exhibitions include ‘What’s new from London’ at The Orion Gallery Belgium curated by Edward Lucie Smith, ‘Artube’ in association with Bloomberg, Martin Kudlek Gallery, Cologne. In 2002 she received an Arts & Heritage commission with Marble Hill House. From 2001 to 2003 she was the curator at The tablet Gallery, London. She launched ‘The Chambers Gallery’ London last year. She is currently Senior Lecturer in Mixed Media Fine Art at the University of Westminster.

Angela Kingston writes: “Peggy Atherton collects road-kill: the squashed and broken bodies of dead road-side animals and birds. She gathers up the corpses of foxes, rabbits, hedgehogs and deer, and crows, magpies and pheasants – and sometimes a dead snake or lizard – and arranges them together in a bed of flower-heads. Sometimes she will make one of these elaborate displays in a quiet location in the countryside, where it becomes a secret shrine. At other times, she casts her tableaux in materials such as fiberglass or rubber, or create a film about them, and in this way her assemblages evolve to become destined for urban galleries.