I want to explore the simplicity of senses, moving and intertwining, trying to make use of the minimum in the concept of elaboration.

Antonio Spinosa’s sculpture in carbon steel is graphic. This sentence would be nonsense if written in the 19th century and would be immediately contested. That is because until the 20th century sculpture was a seen purely as a volumetric form in space. Marcel Duchamp (1889-1968) posed the question: What is Art? Back in 1917 he sent a sanitary toilet as an art piece to an exhibit in New York before being refused. Marcel Duchamp’s question is still alive today in the deepest contemporary discussions. This question led to others: Why should a sculpture volume? This has given birth to the sculpture without volume, lying on the floor or suspended in the air or inserted on the roof, as Antonio Spinosa does. The artist sees one of his sculpture series as Strips, others as Ties or Flames, but the sculpture explore the space graphically, often his sculptural artworks create enigmas on the wall, as copper sheets, until they becomes shiny panels. Finally, Spinosa’s graphic sculpture has reached the roof, for example at the decorated room by Casa Cor, an Architectural Project. 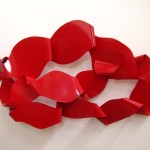 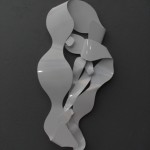 Antonio Spinosa was born on March 4th 1963, in Pentecostes, Ceará. In 1968 his family moved toFortaleza. By the time he was seven he already showed his interest in drawing and drawing was how he used to spend time during his childhood. In 1979 he started working, informally, as a drawing assistant in the architecture office of the National Department of Works Against Drought (DNOCS), where he stayed only for a short time because of his burgeoning interest in sculpture. In 1980 he participated in a selection test to occupy a studio in the “Central Cearense Luisa Távora”. He was chosen and participated in several exhibitions in many capital cities inBraziland abroad. Nowadays he lives in the city ofSão Paulo.