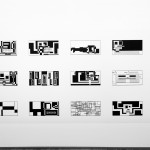 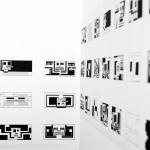 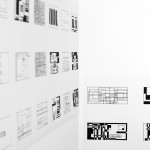 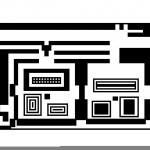 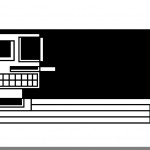 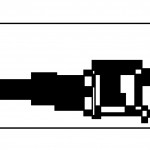 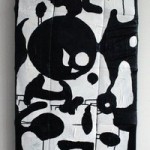 Circuit, James Hutchinson’s new exhibition at UNIT 24 , is the result of an all encompassing obsession with drawing and its application to painting, sculpture, digital print and performance. Taking inspiration from the ambulant JMW Turner, Hutchinson uses mobile technology to facilitate drawing on the move. Anywhere can be his studio though predominantly the digital work takes place on the metro traveling between Newcastle and Sunderland.

Hutchinson takes the view that inspiration can strike in the most banal of places, so having a mobile handy allows him to realize an image before it disappears.

While embracing mobile digital media, Hutchinson’s work is transmogrified into traditional media, both in his studio and virtually within cutting edge computer technology. His work begins from a simple starting point; the pixel, the line, the cube, a text or found object, and undergoes various transformations.

Using a leather sofa cover for the performance ‘Klippen Man’, Hutchinson recreated a seminal Joseph Beuys performance, Coyote (without the Coyote), and dissected the leather cover to use as a surface to paint images onto. It was inspired both by art history and personal ‘Handy’ drawings for which Hutchinson draws upon a bank of images from magazines, films and art, comic strips and children’s television. It is a process which can be seen as both primeval and alchemical. The outcomes, are presented at Unit24: a selection of recent paintings, digital prints, animations and sculptures.

James Hutchinson has exhibited extensively both nationally and internationally. He was born in London in1968, and graduated from Chelsea College of Art and Design with a degree in painting in 1990 and in fine art printmaking from The Royal College of Art in 1998. He now lives in Newcastle upon Tyne and is a Senior Lecturer in Fine Art at Sunderland University.