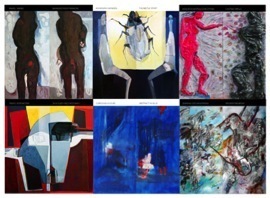 The latest presentation by the art group Page is ˜FORMAT VI COLLECTIVE. The new work of 24 square meters of canvas presents in equal measure six different creative approaches harnessed into one powerful display. Practicing in divergent styles the six artists have agreed to work in one format as a collective towards a joint objective of a show in which an attempt is made at subverting exhibiting standards. The show is challenging the viewer to pass an esthetic judgment at the whole narrative sequence from random individual contributions.

The artists have no common philosophical or political agenda. Nor was there any stipulation as to the style or content of the paintings. The result inevitably is an eclectic series, which allows for any permutation in the order of presentation. Work was produced individually, no one aware of what others were painting until very late in the day when they sent each other images. The only constraint was size. For some artists this may have been
liberation, allowing them not only to work on an unaccustomed scale, but also to venture into realms of expression remote from their usual sphere. Others seem to have had no difficulty continuing along a well trodden path¦
In this exhibition we move through the spiritual, the religious, maybe the sexual, probably the political and certainly the social â€œ/John Jukes Johnson/.

Format VI Collective is an attempt to put the contents into a form, and perhaps to put the form before the contents. I normally do it the other way round, so this is exciting. I think it is also an attempt by six very different individuals to create an exhibition that is different in outlook. The collective format that we collectively imposed on ourselves might at the first glance be perceived as creating a formula, a method, and boundaries that might act as a straight jacket for each individual artist. In fact, it is the opposite. By imposing the challenge of identical format and exhibiting it together, we allow the contents of the work to speak on its own and in itself, challenging the artist who is creating it. Hopefully, challenging the viewer too says Joanna Ciechanowska.

â€œI was invited to join Page 6 art group by it initiator Wojciech Sobczynski. It was very exciting from the beginning as all members represent different styles and techniques. Also the fact, that each one of us has different life experiences which influence their art and yet we are joint by one chosen on purpose single point. It is a kind of experiment to meet the same criteria controlled only by the same format of canvas. The rest is the way the individual vision is transmitted on 4 square meters says Carolina Khouri.

Joanna Ciechanowska is a graduate of Academy of Fine Arts (MA) ASP Warsaw.
She exhibited in Whitechapel Open, Hamiltons Gallery, European Illustration, Gallery Test (Warsaw).
She is at present exhibiting in Orleans House Gallery in Flux, Flow, Flight: Art in Motion .
Received an Honorary Jury Award at the VI International Biennale of Painting in Gdynia, Poland 2011.
Lived and worked in London, Middle East, Africa and Hong Kong, now again she is based in London.
She worked as a graphic designer and illustrator for clients such as; Barclays Bank, British Telecom, CBS Records, IBM, Pan Books, Lock Pettersen and Partners, Times Magazine, Oxford University Press.

Agnieszka Handzel was one of the winners of the German Paderborn Volksbank Young European Artist award in 2001. She is a graduate of University of Silesia Art Institute where she studied painting and ceramics. Drawing as the means for her artistic expression is important to her.
I see drawing as neither an end in itself, not as preliminary sketching leading up to a painting. My drawings form an integral part of my pictures, providing the counterpoint to the areas of paint. My eye hovers over our everyday life, concentrating on people and their emotional experiences. More often than not, I portray women caught up in various situations and connected to their environment by the means of an apparently trivial prop, a gesture or a glance. Occasionally, the woman is accompanied by another figure and subsequently, a story is born says Agnieszka.

Carolina Khouri is Lebanese Polish artist, based in London, a graduate of The University of the Arts in interior design. She has no formal art training. Her art mentors were the established artists, who inspired her to penetrate innovative techniques and styles. Her aim is to find an expression and manner for her art, so it can appear in its individual recognition and define her own singular identity as an artist. For over the past decade her paintings went to the private collections. She is the ASC artist and a new member of Page art group.

Pawel Kordaczka was among the winners of the 2001 German Paderborn Volksbank Young European Artist award. In 2008 he received an award from the Polish weekly New Time. After graduation from University of Silesia Art Institute he was invited for a year lectureship in Fine Art Department. Currently based in London.
My main means of expression are oil painting and pencil drawing, while both the composition and the content are influenced by the ancient art of the Orthodox icon. I have aimed for many years to capture and to preserve that particular brand of spirituality, while veering more and more towards the abstract. My sacral series of paintings had its beginnings in the landscape of my native Bieszczady and the tiny Orthodox churches dotted all around it. Slowly but surely, I stepped inside those unprepossessing temples looking up towards the icon itself; the image at the very heart of the Orthodox tradition. Notwithstanding the fact that over the years my paintings have got deeper and deeper into the realm of abstraction and have moved from the sacred towards the mundane, a small grain of the original inspiration remains says Pawel Kordaczka.

Wojciech Sobczynski born in Poland lives and works in London since 1968. Studied at Academy of Fine Arts in Krakow MA sculpture, and at the City & Guilds of London Art School, followed by the Slade School of Art under Prof. Reg Butler. His work has been shown in a number of galleries in England, Scotland and Poland, recent show of sculptures in Julian Hartnoll. Contributing art reviews articles to Nowy Czas.
I have always striven to build an artistic bridge between the art of the past and the developments of the contemporary art. The use of colour in three-dimensional structures has encouraged me to experiment with wider forms of expression and spatial interaction. Photography too, has an important role in my visual language. The interplay of colour and form has a dominant role in my work whilst the content is considered to be more peripheral. Whether working in a two or a three dimensional format, I am always exploring different ways of unifying painting and sculpture. I am searching for a dialogue between culture – in the widest sense of the word – and my personal reflection on the times we live in. In this endeavour I feel I am in a never-ending confrontation with my very own self.

Pawel Wasek studied fabric and fashion design at the Academy of Fine Arts in Lodz, graduate in 2000 in fashion, drawing and painting. Pawel’s body of work includes paintings, drawings and installations composed out of the detritus of everyday life. His paintings arrive spontaneously; his technique is to work fast, sketching straight onto the canvas, engaging the sub-conscience, evoking often familiar images in a viewer but never explaining the obvious. Often it is only the title of his work that finally satisfies the search the meaning of the image he portrays.