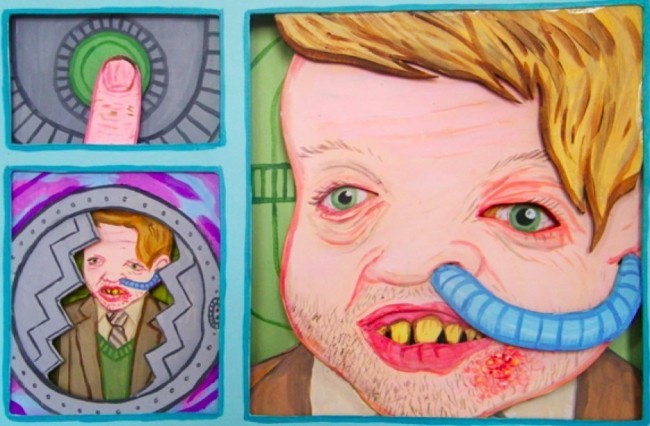 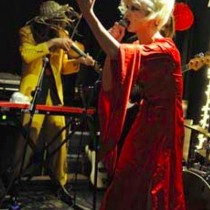 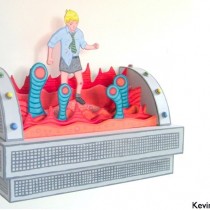 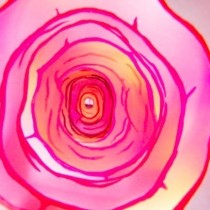 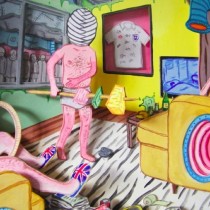 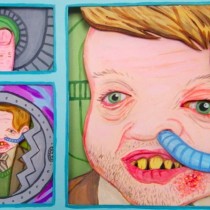 Kevin Wayne – Left to Own Devices 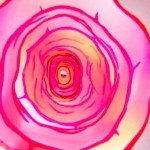 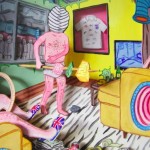 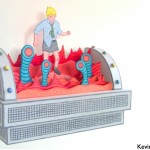 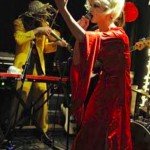 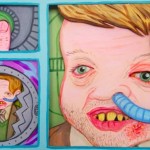 For his first solo exhibition at Unit 24 Kevin Wayne presents Left to own devices, a show comprising of handâ€made sculptures and box constructions produced over the last three and a half years. Wayneâ€™s work is rooted in what could be termed as a â€˜more is moreâ€™ attitude, in that the viewer is invited to investigate and explore a variety of visually dense and detailed objects that sit at a crossroads of alternative illustration and the modelâ€making craft enthusiast.
â€œThis may be an unfashionable thing to say but I believe in the magic of handâ€made objects and their capacity to engage and enchant. My work comes out of a need I have always had to make and play around with bits of card and glue. I have tried making work out of nearly anything you can think of but I have always returned to sitting out in my garage late at night cutting and sticking things together.â€

In his recent work Wayne has started to employ a visual grammar 0f reâ€occurring characters and environments such as lost or disaffected children and teenagers, tangled networks of pipes and wiring and whimsical constructions of wouldâ€be buildings and machines. â€œI am interested in the state of being confused or lost and the awkwardness and vulnerability that comes with it. Over the last decade I worked with children who are in foster care and have been subject to some form of neglect or abuse. I am fascinated by how in many cases these children have largely through their behavior, constructed their own separate worlds as a means of guarding against â€˜normal societyâ€™, and how any outsiders may, as past experience has taught them, wish to exploit and abuse.â€ If Wayneâ€™s work were to be attached to any contemporary trends it would be towards the movement (predominantly rising out of the American west coast over the last decade or so) towards â€˜Lowbrowâ€™ art and Popâ€surrealism, as epitomized by artists such as Mark Ryden and Gary Baseman. As with 1950â€™s and 60â€™s Pop art Britain found its own way of translating shared sensibilities through artists such as Peter Blake and Eduardo Paolozzi. Wayne regards himself in a similar mould, taking on the mantle of celebrating the lowbrow leftovers of visual culture, and attempting to find a way of fusing the parochial and idiosyncratic concerns of a man living and working in a provincial English town. Ultimately Wayne is attempting to create unexpected and surreal little windows into which we peer. Some of what we see may charm and delight, some of it however maybe the cause for darker concern.

Rude Mechanicals are a Panâ€dimensional Creature manifesting itself in your reality as an Absurd Rock/Jazz/Punk Band consisting of Miss Roberts and her symbiotic slaves. If anyone can tell us what type of band we are we would appreciate it â€ Post Punk Alt Funk Jazz Art Rock…maybe? Dancing, lessons in Toe Sucking, body fluid meditation and other complimentary therapies included. Come, come now to my dark dark dark dark pit of…darkness, and wallow in your decadent moistness….
“One of the most exciting bands in outsider music. …a delicous cacophony of trumpets, drums and guitars, led by a screeching singer who looks like Patsy from Absolutely Fabulous as styled by Elizabeth McGrath and sent out to steal childrens souls.Sublime”. Bizarre Magazine â€ FEB ’09
“…the strangely disturbed world of the Rude Mechanicals who sound a little bit like The Flying Lizards, a little bit like The Native Hipsters and a great deal like nothing you ever heard before… ” Tom Robinson BBC6, June ’11